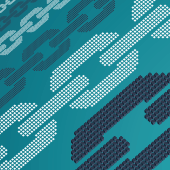 Blockchain technology is very complex. So instead of diving in to what makes it work, we want to first showcase what it’s capable of. The primary purpose of blockchain is faster and more secure information exchanges, which has led to some incredible advances in small-business technology. Read on to see what you might be missing out on.

Blockchain, like the cloud, is more of a concept than a specific piece of software or hardware. It’s the idea that if you store a spreadsheet or ledger on a hundred different computers — each of which receive automatic and encrypted updates — it’s nearly impossible to create a fraudulent entry. If someone adds a line of false information to one spreadsheet, 99 others can confirm it is not in their copy and is therefore inaccurate.

In the Bitcoin ledger, each line represents the transfer of funds from one account to another. So if John wants to transfer money to Jane, he sends a request to Bitcoin’s blockchain and thousands of computers confirm his account information is correct and he has sufficient funds. The money is transferred, both account balances are updated, and the whole process takes less than an hour with almost no human interaction. Much faster than the 5-7 business days of most banks.

There are countless applications for decentralized, real-time record keeping beyond financial transactions, though. And very soon, blockchain won’t be synonymous with Bitcoin.

Although this technology has been around since the ’90s, it lacked the popularity and computing power necessary to become a mainstream solution…until now. With the rise of cryptocurrencies in 2017, blockchain started seeping into other industries, such as:

Most blockchain-based solutions are too new to trust with sensitive information. But you can do a few things to get out in front of your competitors. You can work with us to invest in business intelligence software that helps you collect more data, and start experimenting with risk-free blockchain solutions.

As long as you have certified technicians like ours at your disposal, you’ll be sure to see gains in no time — give us a call today!

Published with permission from TechAdvisory.org. Source.
84